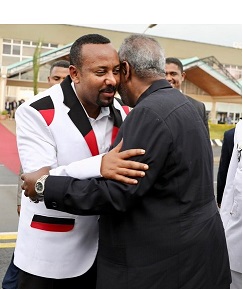 Jimma Industrial Park, a 1.5 million square foot (75ha) wide establishment set in place mainly for textile and garment production, is jointly inaugurated by Prime Minister Abiy Ahmed of Ethiopia, Ismail Omar Guelleh of Djibouti and President Omar al-Bashir of Sudan. The three leaders also launched the construction of the 79 km Jimma – Agaro-Dedesa road project, which will be built at a cost of 1.37 billion birr. Speaking on the occasion, Prime Minister Abiy has remarked that, “The two development projects showcase Ethiopia’s strong commitment to transform Jimma and its surroundings towards industrialization.” Lelise Neme, CEO of Ethiopian Industrial Parks

Development Corporation (IPDC), has added that the fact that the industrial park is built in Jimma, a source of Ethiopia’s major natural resources, would be of benefit both to the local community and the country in general.

This is the second industrial park inaugurated in Ethiopia this year alone, after the 102 hectares wide Adama Industrial Park has been inaugurated in October, some 74km southeast of Addis.

Top Image: PM Abiy greeting President Omar al-Bashir of Sudan at the ceremony, from the twitter account of Office of The Prime Minister of Ethiopia