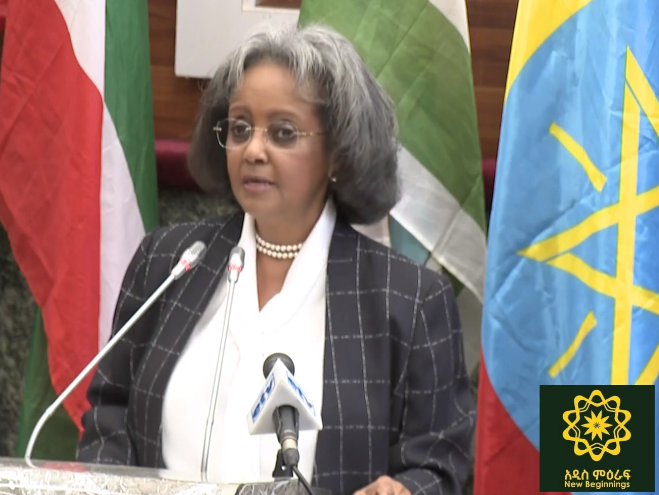 Ethiopian President Sahle-Work Zewde, in her opening remarks at the joint session of Ethiopia's House of People's Representatives and the House of Federation, highlighted several goals the government has set in place. President Sahle-Work made the remarks at the customary speech of the swearing-in of the new members of parliament that will remain in the two Houses for the next five years.

The president has said the economic reform measures being implemented have started to bear fruit. However, she pointed out high rate of inflation and joblessness remain major problems that remain to be addressed.

To grow the economy, reduce the rate of inflation, improve the macroeconomy, raise the productivity of local manufacturers, as well as reap more export earnings from mining and energy are major activities the new administration will embark on, the President said.

President Sahle-Work also recalled that the government aims to increase its earnings to 600.9 billion birr in the Ethiopian fiscal year that started on July 8, 2021. 83 percent of this earnings is targeted to be collected from tax. The government also aims to secure $5.25 billion from exports in this fiscal year.

Mentioning that the nation's planned earnings from agricultural produce is 592 million quintals, the President said the Green Initiative has had a positive impact on the increasingly improving performance.

The President also said the government will give due attention to the manufacturing sector, by encouraging existing actors as well as attracting new investment, to ensure it plays a key role in creating new employment.

Improving the economic stance of urban centers is also one of the focus areas in the coming years, according to the President, from a social security scheme to making them powerhouses of economic development.

President Sahle-Work said several public projects the government has embarked will come to completion during the year. The government will work to ensure access to clean energy and technology in rural areas, as well as provision of quality service in electricity, the President related.

In her speech, President Sahle-Work Zewde also spoke of improved access to various social services, education, as well as peace and security all over Ethiopia. To ensure success, the President said it is important to work "with a singularity of mind and words".

Prime Minister Abiy Ahmed has been sworn in to lead the government for the next five years, and he is expected to form his administration.