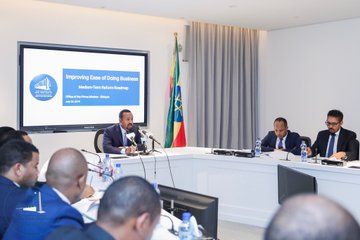 With a vision of placing Ethiopia among the top 100 ‘Doing Business’ ranking countries by 2021, the national committee led by Ethiopian Prime Minister Abiy Ahmed, comprising key government entities, is conducting a review of the key reforms undertaken over the past few months towards creating a conducive business environment.

While the short term milestones have been on legal reforms, Prime Minister Abiy highlighted that institutional reforms to build the requisite implementation capacity and creating public awareness on the new ways of doing business will be a key component in the medium to long term.

The key short-term achievements of the past few months reviewed by the committee were put under eight categories: starting a business, getting credit, trading across borders, paying tax, dealing with construction permits, registering property, enforcing contracts, and getting electricity.

Moving forward, Prime Minister Abiy assigned chairing of the national ‘Doing Business’ committee to the Ministry of Trade and Industry and the Ministry of Innovation and Technology on a rotation basis, to drive the implementation of established medium and long term priorities set.

He also announced that a new national-level committee will soon be launched to steer progress in jobs creation and investments over the course of the Ethiopian year 2012, which starts in September 2019, in synchronicity with the ‘Doing Business’ committee.

Source (Including Image): Twitter Page of the Office of the Prime Minister - Ethiopia